AnneMarie Mingo is an assistant professor in African American Studies and Women’s, Gender, and Sexuality Studies. She is currently working on her first book project in which she constructs a liberation theology and social ethics from oral histories gathered from Black religious women who were active in the Civil Rights Movement.

As a religious social ethicist, Dr. Mingo’s research interests include 20th and 21st century Black freedom struggles with a specific focus on the U.S. civil rights movement, South African anti-apartheid movement, and the movement for Black lives, womanist ethics, and theological and ethical influences in social movements. She also publishes in areas of Black church activism, peace and reconciliation, and the influence of Black arts on religious social activism.

As a scholar-activist Dr. Mingo is involved in various justice projects on Penn State’s campus and throughout the broader community. She was inducted into the Martin Luther King, Jr., Collegium of Scholars at Morehouse College in 2016 for her work carrying out the ethical traditions of Kingian non-violence, and she has won numerous awards at Penn State, including the Barash Award for Human Service (2016) and the College of Liberal Arts Outstanding Faculty Advising Award (2017). 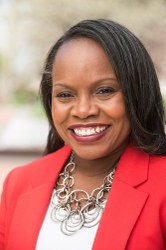