UNIVERSITY PARK, Pa. — Can peace between Israelis and Palestinians be achieved, in part, through anti-bias messaging in children’s educational entertainment? That is the subject of a new book by Yael Warshel, assistant professor of telecommunications and media industries at Penn State, titled “Experiencing the Israeli-Palestinian Conflict: Children, Peace Communication and Socialization.” 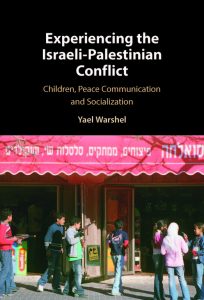 Published by Cambridge University Press, the book provides an in-depth study of communication interventions aimed at reducing intergroup bias among Israeli and Palestinian children. Specifically, the book critically assesses the effectiveness of Israeli and Palestinian versions of the children’s television show “Sesame Street” in building and supporting the making and sustainment of peace.

The series offered a utopian vision of the Israeli-Palestinian conflict. In the show, Israeli and Palestinian children became friends and the conflict had already been resolved by the creation of two separate states: Israel and Palestine.

Read More
Topic(s): Global Issues
Sign Up for our Newsletter: