She has also published with the New Republic, the New York Times, and the Los Angeles Times and has been a commentator on NPR. Among Brown’s academic accolades, her paper, “The Blacks Who ‘Got’ Their 40 Acres,” was one of two papers selected in the property category for the Yale/Harvard/Stanford Junior Faculty Forum.

Brown, a Jamaican national, was previously a senior executive at the Caribbean Investment Fund, L.P., the first pan-Caribbean private equity fund in the British Commonwealth Caribbean, and a chair of the Jamaica Trade Board. Brown has recently been appointed by Andrew Holness, the prime minister of Jamaica, to the CARICOM Commission.

She has served on the boards of several publicly traded Caribbean companies and was the youngest director of two subsidiaries of the Bank of Nova Scotia (Jamaica), one of the largest subsidiaries of the largest Canadian bank (by market capitalization). Brown chaired the Conduct Review Committee of the Board for Scotia Jamaica Investment Management. She was a member of the Sugar Enterprise Team, the entity appointed by the Jamaican Cabinet to oversee private sector participation in the Jamaican sugar sector. 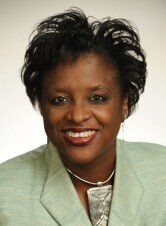